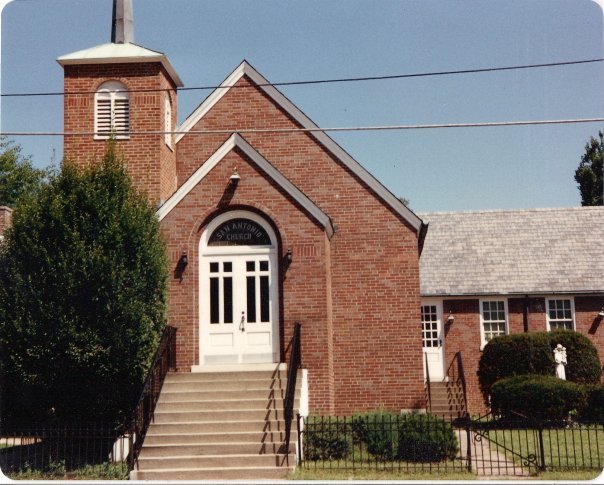 Around the turn of the nineteenth into the twentieth century, there were a number of immigrants who came to the Unites States from southern Italy. A significant group came to Cincinnati and settled in that portion of the Lick Run Valley that runs from present day Quebec Avenue to Wyoming Avenue along Queen City Avenue. Most were Catholic and joined St. Bonaventure Parish. Some Sisters of Charity noticed their special needs – cultural, social, as well as religious – and urged that a separate parish be established for this ethnic group. The education of their children still took place in the larger setting of St. Bonaventure School. Thus, San Antonio Church was established as a separate parish in 1922 with a Franciscan pastor who lived at St. Bonaventure Monastery.

The people went about building a parish, developing traditions, and doing all those things necessary to have a parish that was similar to the other parishes in the Archdiocese of Cincinnati. The present church on Queen City Avenue at White Street was completed in December 1940. The first immigrant parents insisted that their children learn English. They chose often not to teach or even allow their children to learn Italian. Italian was not the language for worship, sermons, or other things in the parish. Their dialect might be the common language for the first adults, but English was the language for their children. Like the rest of the Catholic Church the common liturgical language was Latin until the late 1960’s when the liturgical language was changed to English.

As the people outgrew their smaller homes in what became know as “Little Italy” and had the means to move, they began to move to Western Hills, Delhi, Westwood, and Cheviot. Many sent their children to the local Catholic parish schools, but they continued to come to San Antonio Church for worship and other social events. In the late 1980’s as the Archdiocese began to look to the future with fewer priests and how to deal with smaller parishes San Antonio became a chapel of St. Bonaventure Church in 1989. When St. Bonaventure closed in 2003, San Antonio became part of St. Leo the Great Parish in Fairmount.

The people of San Antonio Church continue to carry on the mission of the Catholic Church and support themselves and Holy Family Parish in many ways. Their ethnic identity is a prominent characteristic for many, but it is not the only one. Together these two communities serve God and neighbor.