On March 22nd, we honor the 4th Sunday of Lent with Laetare or Rejoice Sunday which falls 21 days before Easter Sunday.  In Rome, this day is called Dominica de Rose for the Golden Rose sent by Popes to Catholic Sovereigns which dates to the 11th Century.  On Laetare Sunday, the Station Church visited on this Sunday by Pope Francis will be Santa Croce in Gerusalemme (Basilica of the Holy Cross) one of 7 Pilgrim Churches of Rome that was consecrated in 325 with relics of the Passion of the Christ.

The other Station Churches for the week of March 23-28 are for Monday:  Santi Quattro Coronati (Dedicated to the Four Holy Crowned Ones-Martyrs),Tuesday:  San Lorenzo in Damaso (once the site of a pagan temple dedicated to St. Lawrence), Wednesday:  St. Paul Outside the Walls (Founded by Emperor Constantine over the burial place of St. Paul.  It is an ancient Basilica owned by the Holy See), Thursday:  Santi Silvestro e Martino ai Monti (St. Martin in the Mountains where in 324 a meeting regarding the Council of Nicea was held ), Friday:  San Eusebio (Dedicated to 4th Century Martyrs) and on Saturday, San Nicola in Carcere (St. Nicholas in Prison, dedicated by the Greek population in the area around the 11th Century, one of the Traditional Station Churches of Lent that holds special celebrations to the Madonna, Our Lady of Pompei and Our Lady of Guadalupe).

Laetare or Refresh Sunday is considered a day of hope and joy with Easter getting closer while allowing Rose colored vestments to be used, flowers being placed on the Altar and weddings may be performed on this day.  In England it is also called “Mothering” Sunday from a time when servants were released from service on this day to visit their Mother’s.

On Laetare Sunday, the University of Notre Dame will announce the recipient of the Laetare Medal, the oldest and most prestigious award for American Catholics.  In Notre Dame’s history, it was the founder of the University, Fr. Edwin Sorin, C.S.C. who suggested that such an award be given.  First awarded in 1883, to John Gilmary Shea and historian of the Catholic Church in the United States, the medal is an external award which can be given to a person outside of Notre Dame. This award was conceived as a version of the papal Award, the Golden Rose.  The Medal has the Latin inscription “Magna est veritas et praevalebit” which means, “Truth is mighty, and it shall prevail”.  A committee will take names of potential recipients from the faculty and staff at the University of Notre Dame and will then select two or three candidates which will then be voted on by the Officers of the University.

A candidate for the award must be a practicing American Catholic who has made a distinctly Catholic contribution in his or her profession or intellectual life.  The past recipients of the Laetare Medal have come from a variety of fields including Cardinals, Philanthropists, Ambassadors, Authors, Opera Singers, Senators, Doctors, Generals and a U. S. President.  The 2020 winner will be awarded at the 175th Commencement Ceremonies at the University on May 17th.  The commencement speaker will be Patriarch Bartholomew, the 270th Orthodox Archbishop of Constantinople who is known as the “Green Patriarch” promoting the causes for the protection of the environment, human rights and religious freedom.

In this present time of public health concern, the Archdiocese of Cincinnati has given the following guidance to parishes, schools, and other institutions about celebrations of public worship: Beginning immediately, and until further notice:

General Precautions that should continue to be followed:

Other Possible Precautions for Health and Safety:

All are encouraged to pray for those afflicted with serious illnesses and health-care professionals. Resources for liturgical prayer in a time of public health concern can be found on the website of the Office for Divine Worship and Sacraments. Please contact the ODWS if you have any questions.

SOLD OUT! Sorry, no more dine-in or carry-out is available. If you have a ticket, we look forward to seeing you.

The San Antonio Pizza Party, sponsored by the Men’s and Ladies Sodality, is on Saturday, March 7, 2020.

Carryout pizza will be available starting at 3 pm and until 9 pm. The cost is $10 per pizza and pizzas will be ready for pickup at the time you select.

Dine-in will be served from 5 pm and until 9 pm. We will be featuring “Ladies of the Lot Pizza” as a tribute to the ladies who made pizza for San Antonio Church festivals.

We will be making Cheese, Pepperoni, Meat and Veggie pizzas and two dessert pizzas, one Sweet and one Savory.

Dine-in cost is $15 per person and includes pizza, salad, and beverage; all you can eat!

Tickets are available after Mass each Sunday, and you can also call Vic Minella (513) 520-5594 or email your request to pizza@sanantoniocincinnati.org.

This is a very popular event; we can only accommodate 140 guests so get your tickets early!

On Sunday, April 14th we will be having our Easter Bake Sale. Come down to San Antonio Hall after 9 a.m. Mass and pick up your goodies!

From time to time, we need to reach out to you. Things happen…our Spaghetti Dinner, our Pizza Party, special brunches after Mass, and even closures and no Mass due to inclement weather.  Please complete the form below to be added to our notification list. Your email address and name are required, the other info is optional but will help us serve you better. We won’t flood you with emails, or share your info with third parties.

Give it a try, we know that you will be pleased!

Get your Spaghetti Dinner tickets now! 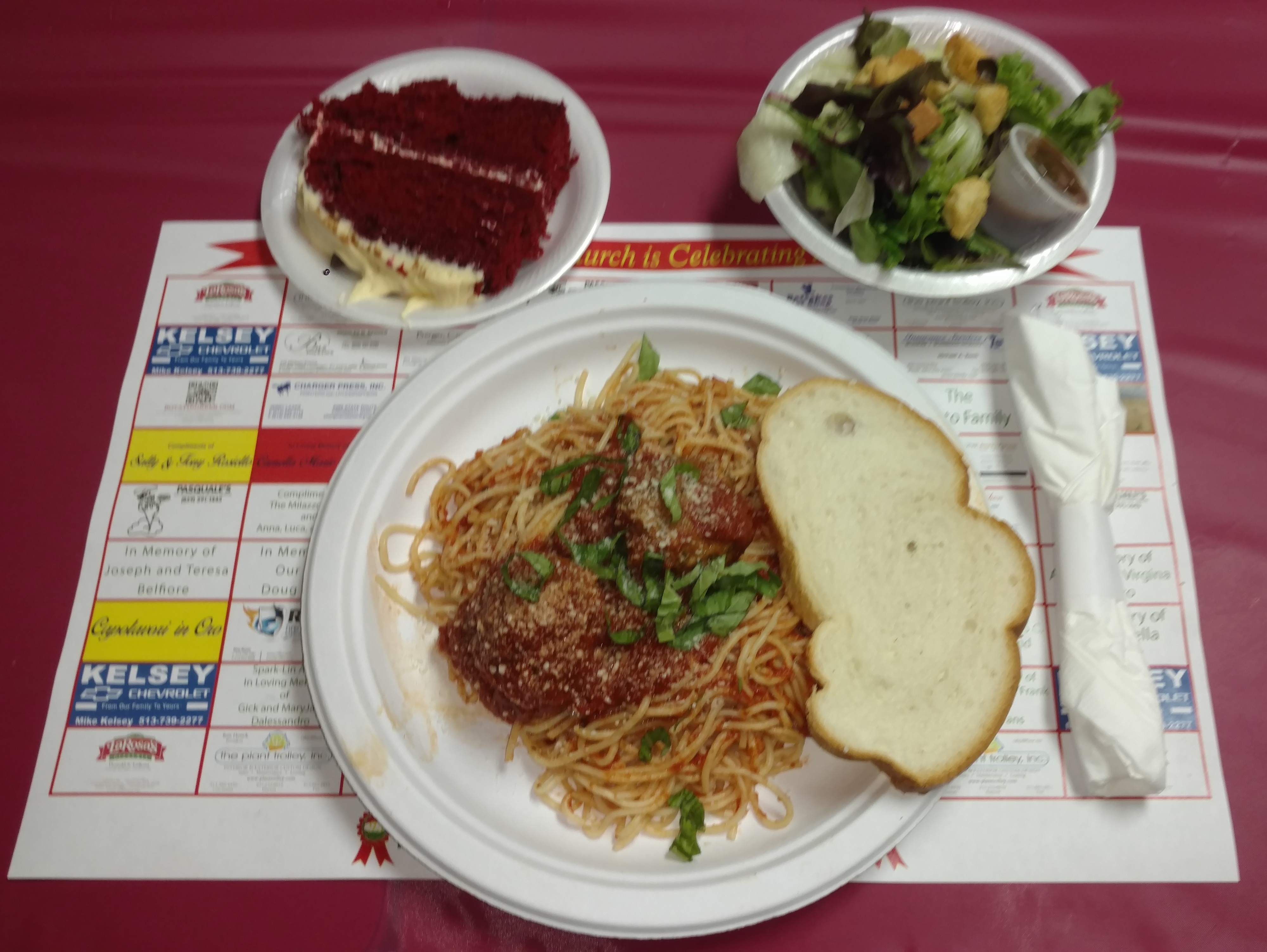