We would like to thank everyone who has continued to contribute to the ongoing expenses of San Antonio Church by mailing in their weekly envelopes or by contributing electronically utilizing WeShare . The buttons below allow you to make an online donation directly to the listed account for San Antonio Church.

Our beloved Sr. Blandina Segale, Servant of God has been on the path to sainthood  since 2015 on the urging of the Archdiocese of Santa Fe, New Mexico.  As a young girl, she wanted to be a servant of God and also serve those in need; thus she joined the Sisters of Charity.   Born  Rosa Maria Segale (1850-1941), she chose the religious name of Sister Blandina in memory of St. Blandina who was martyred in 177 during the reign of Marcus Aurelius.  St. Blandina  belonged to a group of Martyrs who were tortured and  persecuted because of their religious beliefs.  St. Blandina lived her life as a slave who had been taken into custody along with her Christian master.  At  that time, many slaves for fear of torture would testify against their masters and would tell  their  captors stories of when  a group of Christians assembled, they would commit  many unspeakable acts.  Their testimony would be sent to the Emperor about the  confessions of misconduct that was coerced out of those terrified  slaves who had served in Christian households.

They were also asked about their faith and  beliefs  and those who denied their faith were released and those who held steadfast to their Christian beliefs were executed.  In France, The Amphitheatre des Trois-Gaules (Amphitheatre of the Three Gauls) is the town’s arena where many such tortures took place.  After their sham trials were held; those who would not deny their beliefs were bound to a stake and suffered a horrible death.  Until the end, St. Blandina repeated to every question asked of her, “I am Christian, and we commit no wrongdoing .”   There is a shrine dedicated to her in France and a memorial to her at the stake where she and the other martyrs died.

We continue to pray to  Sr. Blandina Segale, Servant of God, on her path to canonization and to ask her to intercede with the prayers of our church community.  Our parishioners are steadfast in praying for the needs of those  in need of special favors as we remember Sr. Blandina Segale.  We will always be indebted to her, her beloved older sibling, Sr. Justina ( Maria Maddalena Segale) (1846-1929) and their Order, the Sisters of Charity.  They were both laid to rest in the Sisters of Charity Cemetery in Delhi.  Sr. Blandina is in Plot Section A, Row 1, Grave 6E, Sr. Justina is located in Plot Section A, Row 2, Grave 7E. 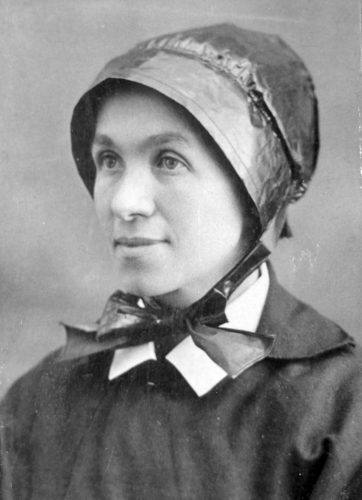