We would like to thank everyone who has continued to contribute to the ongoing expenses of San Antonio Church by mailing in their weekly envelopes or by contributing electronically utilizing WeShare . The buttons at the bottom of this post allow you to make online donations directly to the listed account for San Antonio Church.

On Sunday August 1, 2021, San Antonio Church will hold a Mass and Reception in our Hall to kick off the celebration for our church’s  100th Anniversary next year.   We will cover the years of 1922-1931 to gather stories of the neighborhood, our church and the families who were part of the fabric of that history.  To start our milestone event, we will introduce four early families who will  bring in their information, documents and pictures to share .  These families were present  when on the 6th of August, 1922  with the opening of the St. Anthony Welfare Center and  were there at the formal opening on October 8th,  1922. 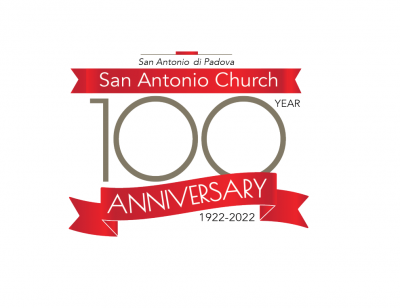 Please join us as we begin the year long celebration of the 100 years of history of San Antonio Church on Sunday, August 1, 2021.

We will celebrate the first decade (1922-1931) of our church history, honoring these founding families and their descendants:

Join us for fellowship and refreshments in the Church hall after Mass.

August of 2022 marks the 100 year anniversary of San Antonio Church!

In the 12 months leading up to the big celebration and to honor the history of San Antonio church , we will host after-Mass events on the first Sunday of each month through July 2022. Each month will highlight a different decade with historic facts and benchmarks that include founding families and clergy who led the way during that time period and helped build the church and its legacy.

These events are open to all! Whether you are related to these families or not, please join them in kicking off this year long celebration!

Mass is at 9AM on August 1, followed by a gathering in the church hall.
There will be refreshments, fellowship and family group photos taken.